Some student writers struggle to access their full vocabulary while in the frenzy of a first draft or the more attentive work of revision.  Since poems are filled with strong diction and fresh uses for familiar words, a poem can actually be sourced as a bank full of powerful language.

The poem "The Last Movie" by Rachel Hadas is more than just a poem about a movie.  It is poem about coping with impending loss.  After a first read, of this piece, it is vital to ask students, "In addition to a movie, what else is this poem about?" before trying to mine the language from these powerful stanzas.

Recently, before watching the trial scene from the black-and-white movie To Kill a Mockingbird, I asked students to choose one actor to study closely so that they could write a review of that actor's performance.  We had already read "The Last Movie" at the start of class, but after watching the scene, I invited students to find five words in this poem that they might use in writing their review.  The resulting reviews contained lines like "Mr. Ewell's look was opaque as he realized . . . that Atticus was doing a great job," or "Rather than spewing fury against Mayella Ewell or Bob Ewell, Peck continues to be the person who brings reason to the trial."  Students put the words to work to create an authoritative voice in their reviews. 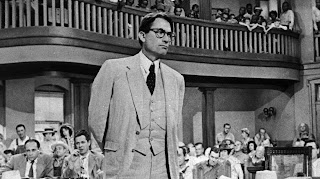 Of course this principle has far broader application.  Before a draft day for an argument piece or a lit analysis, read a poem that is particularly rich in its diction, the"chocolate mousse" of word choice, and have students find just a few words to create a word bank.  These should not be mandatory to use in a draft, but the challenge of using a seemingly unrelated but interesting word often opens doors to more vibrant sentences.

P. S. Thanks to Bryce and Rebecca for letting me use their writing samples in this piece.

Brett Vogelsinger is a ninth-grade English teacher at Holicong Middle School in Bucks County, PA.  He is the faculty adviser for the school literary magazine, Sevenatenine.  Besides his annual blogging adventure on this site, he has published work on Nerdy Book Club, The New York Times Learning Network, and Edutopia and you can follow him on Twitter (@theVogelman).

In 2020, we celebrate our fourth year of Go Poems, a collection of brief ideas to share a #poemaday in your classroom during National Poetry...